In a deviation from its typical product launch fanfare, Apple revealed a new version of AirPods on its website today, adding the totally wire-free headphones to its list of products that now have the “Pro” moniker.

Apple has long used “Pro” as a means of communicating that the gadget is supposed to include better technology—while selling at a premium—and the AirPods Pro are no exception. (Yes, the “s” goes on AirPods, not Pro; we’ll see how long that lasts.)

The AirPods Pro appear to have a different design than the original AirPods. Most notably, these Pro ‘pods have swappable in-ear tips, undoubtedly an effort to appeal to customers who never bought the fixed-fit AirPods because of comfort concerns. The new AirPods will come with three different sets of flexible silicone ear tips.
The “stick” that extends from each earbud appears to be shorter than the stick on the original AirPods, and more angled. The AirPods Pro charging case is also more compact than the previous model. And the new AirPod Pros are sweat and water-resistant, with an IPX4 rating—but don’t expect to go for a swim with them anytime soon, since they’re designed for “non-water sports and exercise.” 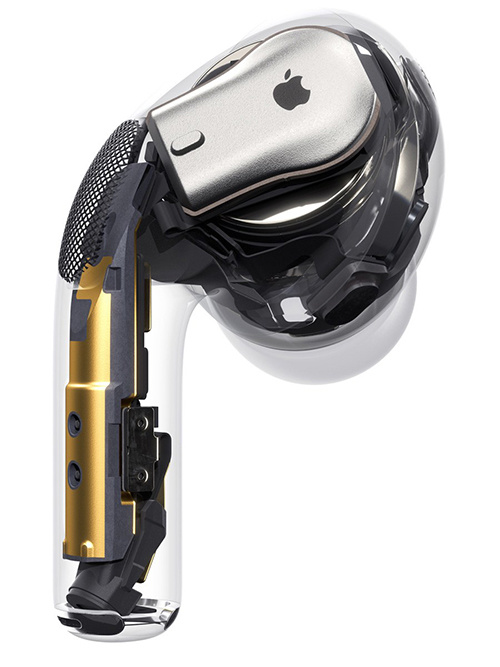 Like the second-gen AirPods released in March, the AirPods Pro include Apple’s custom H1 chip, a 10-core audio chip that’s supposed to optimize sound, let wearers switch between Apple devices more quickly, and power Siri on the headphones. In recent years, Apple has made increasing efforts toward building custom silicon for its products as a way to tightly control the product experience and also to differentiate from competitors.
Now this custom chip is also being tasked with handling noise cancelation, adaptive sound equalization features, and a “transparency” setting on the new AirPod Pros. Each AirPod has two microphones, one that’s outward facing and detects outside noise, and another that faces toward the air to help detect any other noise that needs to be canceled out. The transparency mode, meanwhile, is designed to let in a certain amount of outside noise when you might want it, like if you’re out on a run and want to listen to music but also stay aware of your surroundings. Apple says this is powered in part by a “new, innovative force sensor on the stem” of the AirPods Pro. 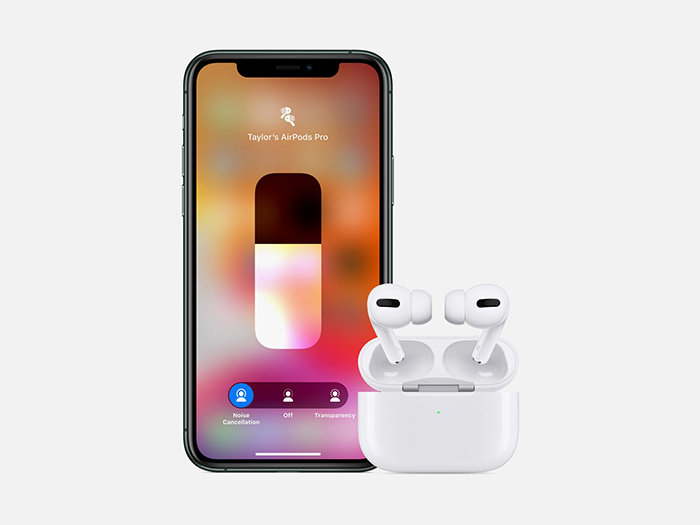 Battery life is expected to be around the same as regular AirPods—4.5 hours of listening time per charge on the AirPods Pro, compared with 5 hours on the regular AirPods—with some caveats. Using the new noise-cancelation feature on the Pros reduces battery life. And in the fine print of Apple’s web page for AirPods, the company states that it conducted tests on the AirPod Pros using audio tracks purchased from the iTunes Store and with volume set to 50 percent, so streaming music or audio under other conditions could also affect “real life” battery tests.

These AirPods Pro start shipping this week, on October 30, for $250. That’s a lot of money for little white ear dongles that are all too easy to drop on the subway tracks or lose entirely. But the fact that they have noise-canceling technology makes them more compelling. $250 is on par with other decent, noise-canceling headphones on the market, though most of those are wired, and many are over-the-ear headphones. Sony makes noise-canceling earbuds, as does Master & Dynamic, and those range from $230 to $300. On the other hand, Amazon recently announced a pair of noise-reduction, Echo-branded earbuds (also shipping on October 30!) that will cost just $130.

These new Apple AirPods Pro were rumored to be in the works, with language included in beta versions of iOS 13 tipping off the tech community. One report suggested that these new AirPods might come in different colors, but so far they appear to only be available in white.

Another element of the AirPods Pro that Apple did not address in its earliest statements about the product was whether these new headphones would be any more repairable than previous versions. A Washington Post report earlier this month highlighted how unlasting and irreparable AirPods are, since the rechargeable lithium ion battery can stop holding a charge in as little as two years, and Apple simply replaces the tiny ear pods rather than fixing them.

A spokesperson for Apple did not have an immediate answer to questions from WIRED about the repairability of the AirPods Pro.